By default, all alarms and timers you set on your iPhone chime a loud tone at the designated time. However, in situations such as when you’re in the office or don’t want to disturb people around you, you might want an alarm or timer that doesn’t go off like an emergency siren but rather alerts you discreetly without sound.

Set a vibrate-only alarm on iPhone

1) Open the built-in Clock app and tap Alarm from the bottom.

2) Tap the plus button to add a new alarm or hit Edit and pick an existing alarm time to make changes.

4) Scroll down and set None as your alarm sound. Now, this alarm won’t play any tone when it goes off. 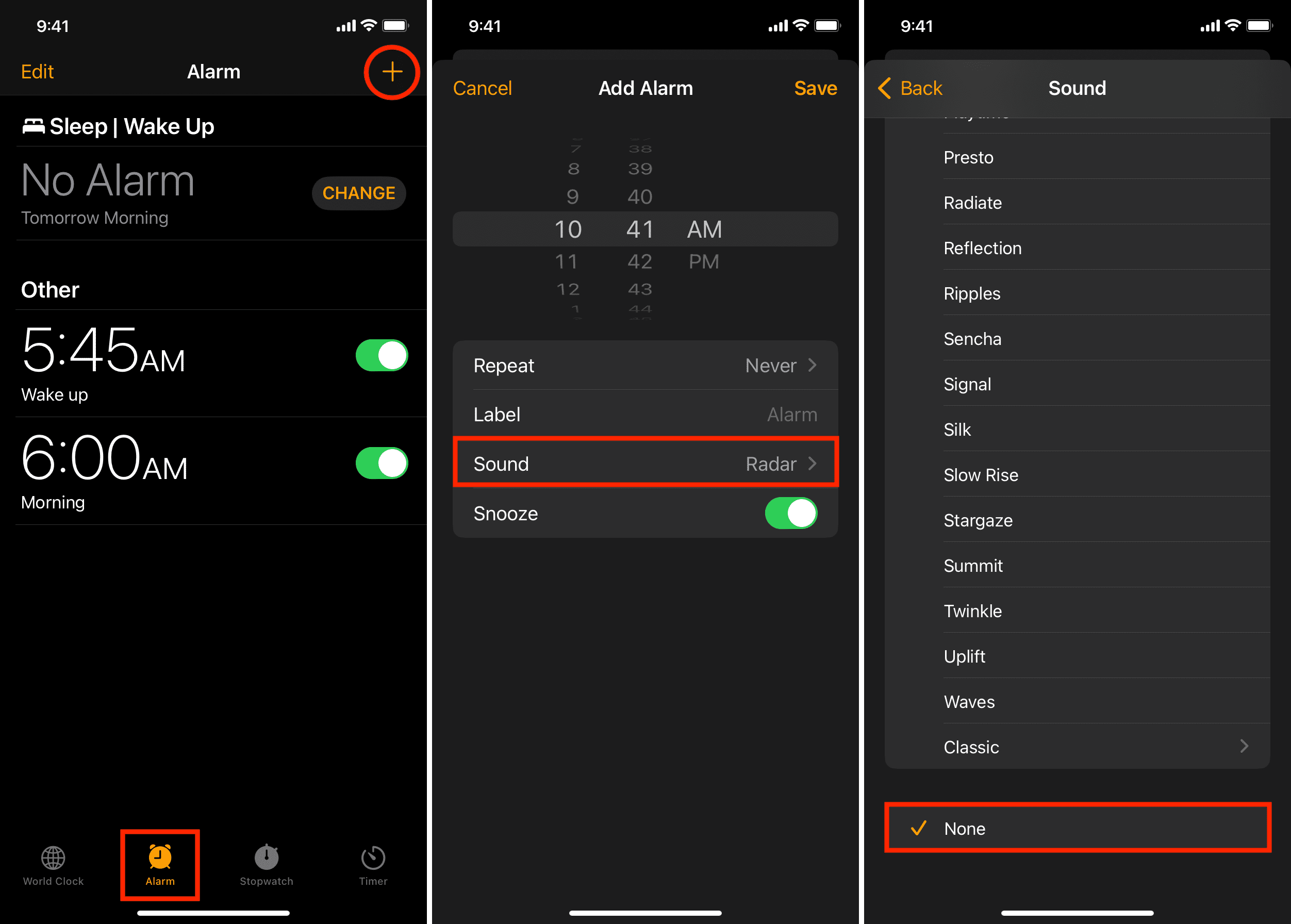 5) Next, scroll to the top of the same screen and tap Vibration.

6) You can keep the default vibration pattern or pick another one. When you tap any vibration name, you’ll feel its pattern. In my opinion, Rapid is a good choice as it sends quick vibrations, making them easily noticeable. Besides using the standard built-in options, you can also create new vibration styles on your iPhone.

7) After setting the vibration, tap Sound > Back from the top left corner. 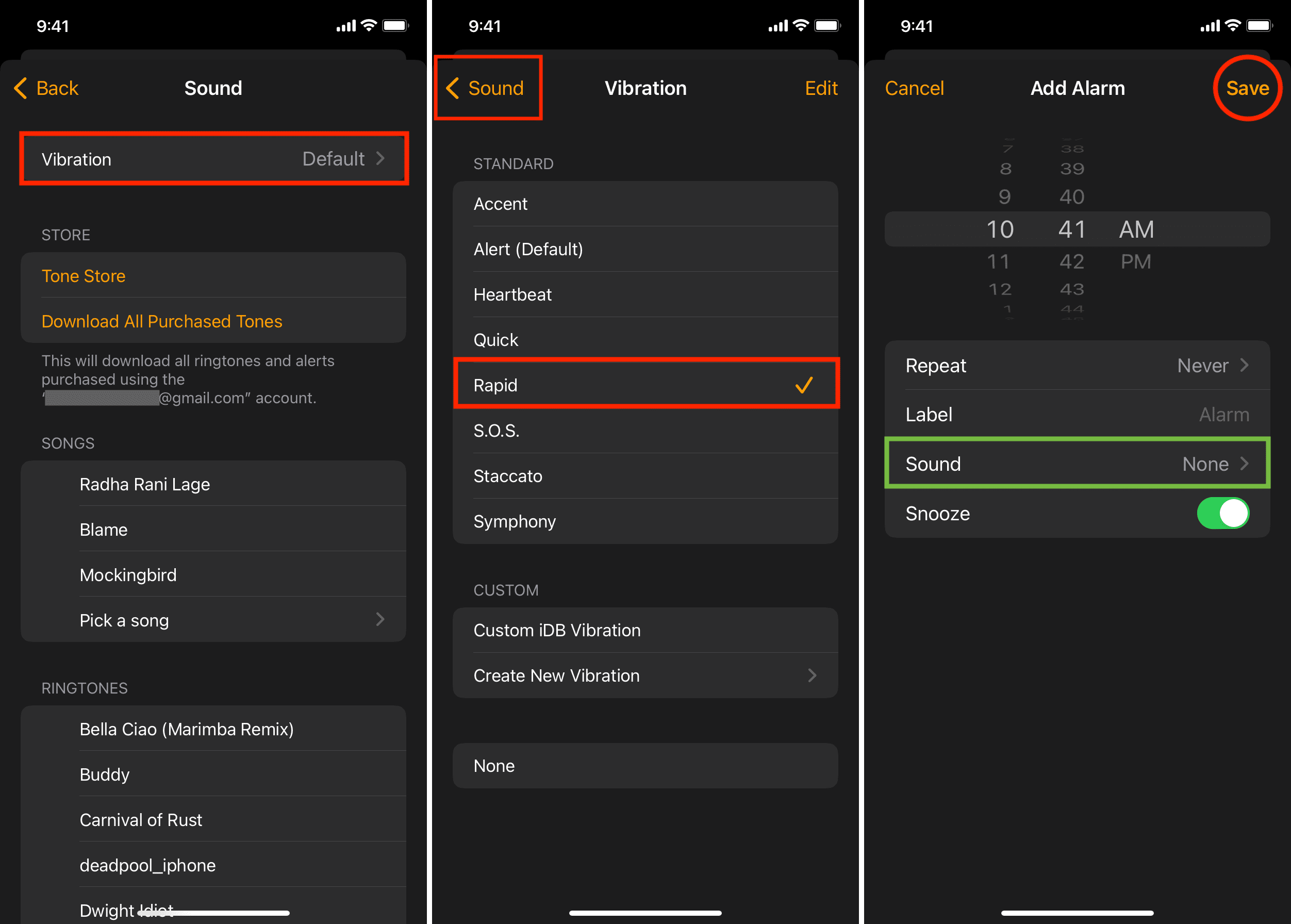 You have successfully created an alarm on your iPhone that will only vibrate when the set time comes. It won’t make a sound.

Please note that vibrate-only alarms are useful in some instances. You won’t want them to be your morning wake-up alarm, as it’s easy to miss them. In case you don’t want to startle your significant other with your early alarms, consider setting alarms on your Apple Watch, which will nudge you on your wrist to wake you up.

Set a vibrate-only timer on iPhone

While the stock Clock app allows setting an alarm that makes no sound and only vibrates, the same isn’t true for timers. When you go to the Clock app > Timer > When Timer Ends, you’ll only find tones and Stop Playing. There is no option to set the timer sound to None and pick a vibration. Therefore, you’ll have to rely on third-party apps for vibrating timers.

Follow these steps to set iPhone timers that don’t make a sound and only vibrate:

1) Get Viberation Alarm or VibeAlarm for free from the App Store. We’re picking the former.

2) Open the app and allow it to send notifications.

3) From the Timer section, set the desired time in minutes and hours. Once done, hit Start.

4) You can exit the app but don’t force quit it. The app will send multiple notifications at the set time and make your iPhone vibrate.

In my testing, I found that by default, the Viberation Alarm app sends 15 notifications and thus vibrates 15 times. However, you can go into settings and set it to vibrate 50 times! On the other hand, VibeAlarm sends 20 notifications and vibrates 20 times. 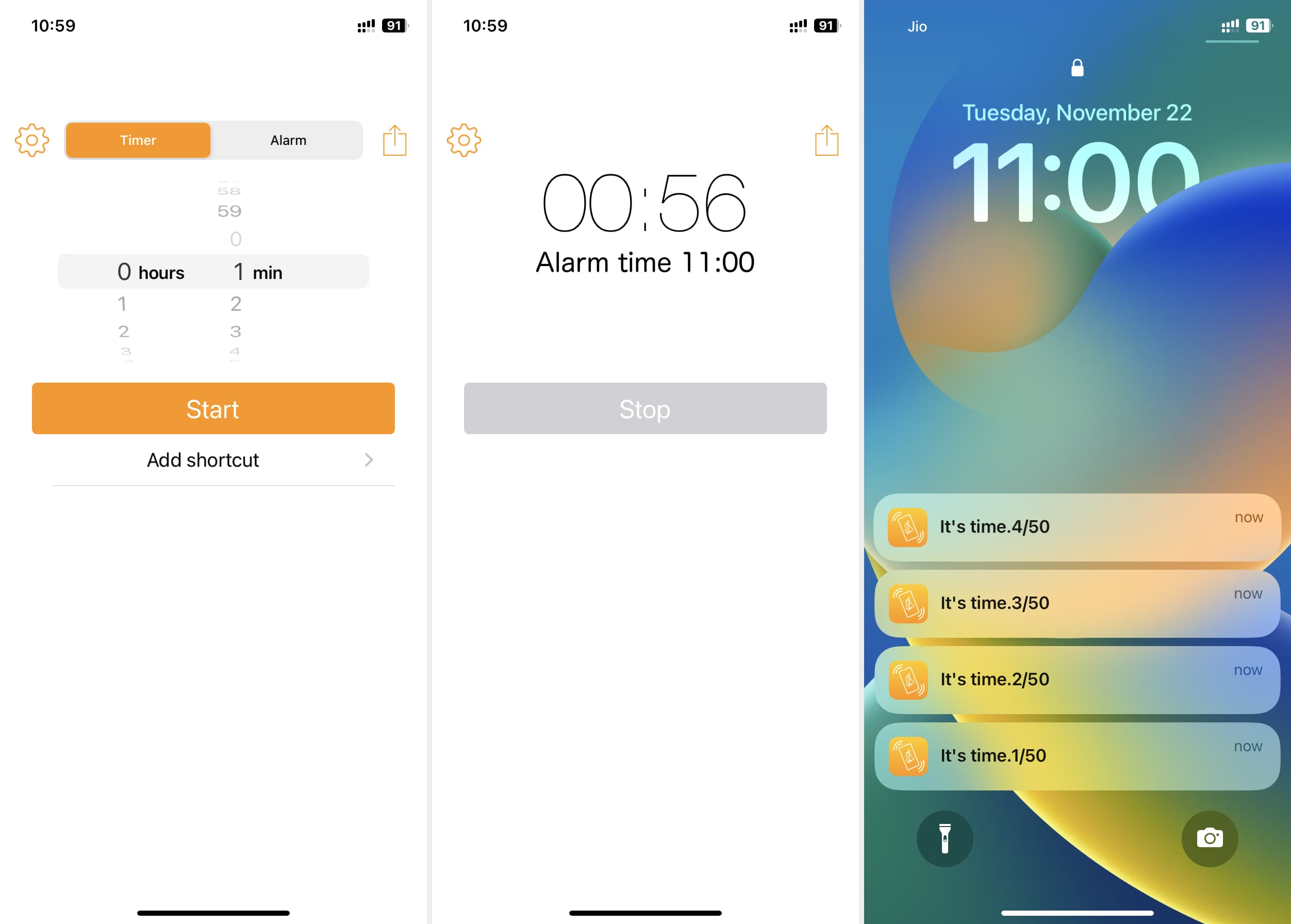 This is how you can use timers on your iPhone that only vibrate and make no sound.

If you don’t want to get an additional app on your iPhone, you can stick to using the built-in alarm feature of the Clock app for your timer needs. After all, both alarms and timers are meant to notify you at the set time. So, instead of setting a five-minute timer, you can set the alarm five minutes from now. You get the idea.

Do iPhone alarms and timers ring even when iPhone is in silent mode or Do Not Disturb mode?

Yes. Alarms and timers ring even when your iPhone is in silent mode or Do Not Disturb (DND) Focus mode.

This is because alarms and timers are essential features that have the privilege of bypassing silent mode and Do Not Disturb mode. Several users put their iPhones in silent mode or DND before sleeping to cut down disturbing notifications. Now, if iPhone didn’t sound the alarm during silent mode or DND, imagine how many people would be getting up late for work because their morning iPhone alarm didn’t wake them up!

Important: An alarm or timer set using a third-party app won’t ring if your iPhone is in silent or DND mode.

Can I set vibrating alarms and timers on the iPad?

Unlike iPhones, iPads don’t have a vibration motor or Taptic Engine. So, you can’t set vibrating alarms, timers, ringtones, and alert tones on your iPad.