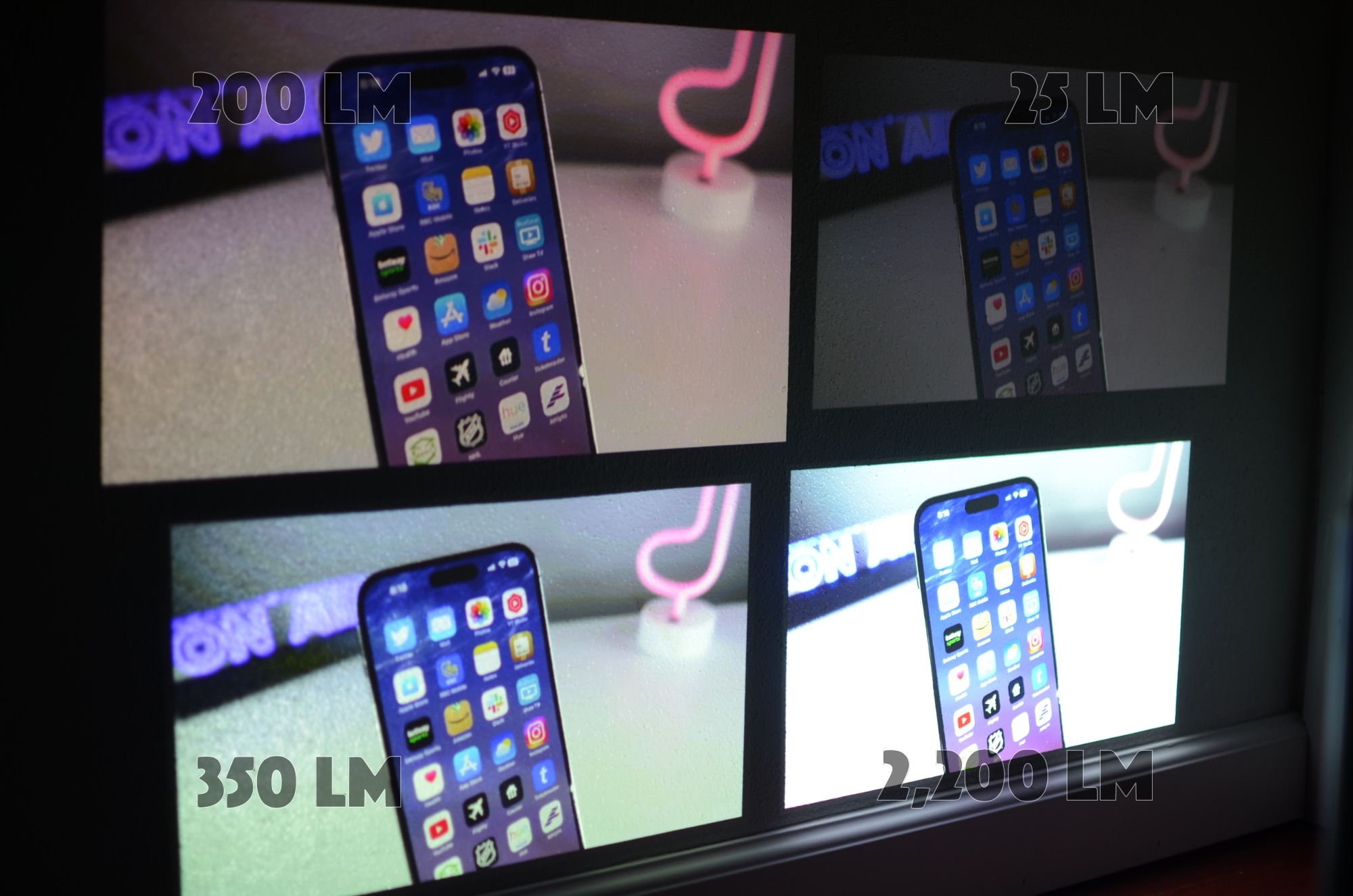 While most people have a TV in their living room, you won’t find one in mine. I instead gravitate toward DLP projectors because of their versatility as home entertainment systems and mobile-friendly variable-sized displays. 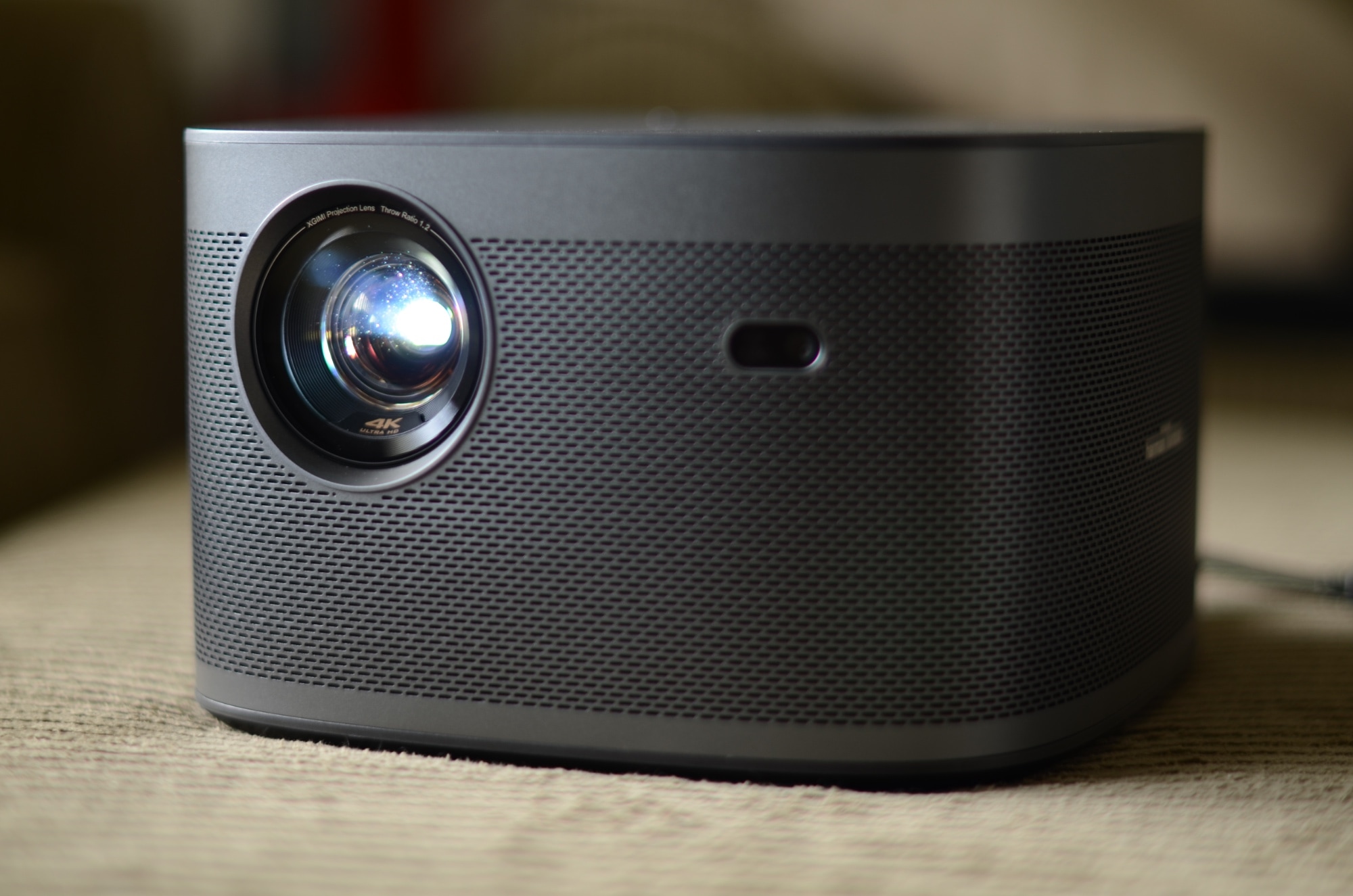 The choice to go TV-less was easy for me because I spend little time at home, and moreover, taking a TV with me to a friend’s house or on a camping trip wouldn’t be as practical as packing a small box I can shine on virtually any flat surface and adjust the screen size accordingly.

The XGIMI Horizon Pro is my top choice for a DLP protector because it delivers astounding picture quality with enough brightness to be used as both a daytime and nighttime projector. If you’re looking for something that will immerse your family in the best movie-watching or gaming experience you’ve ever had, then read on as I share the highlights of this beast. 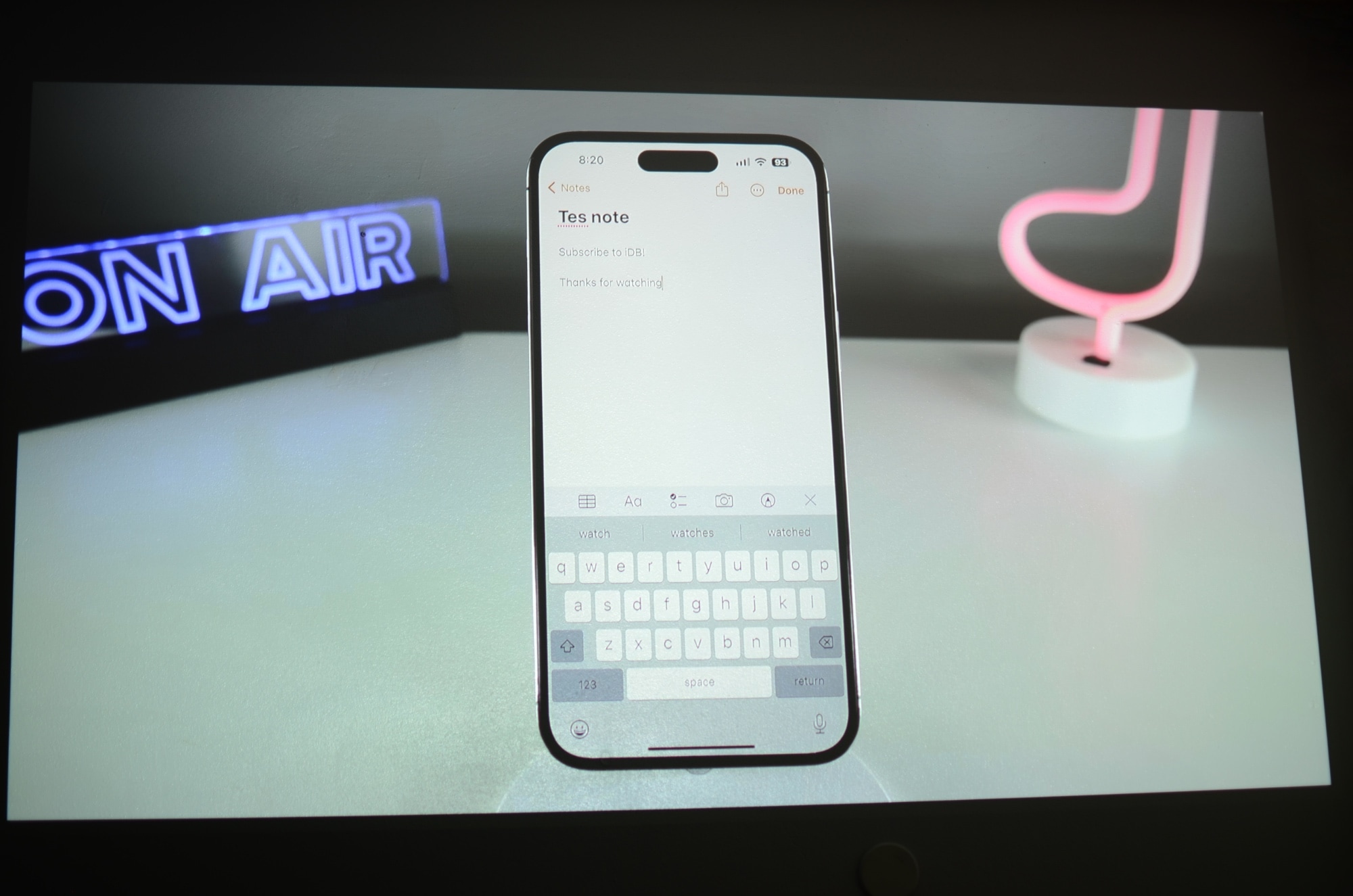 I’ve owned and used several portable DLP projectors over the years, spanning the spectrum of 480p to 1080p HD video output, varying degrees of lumen output, and some more portable than others, but the Horizon Pro takes the cake as it cranks out glorious native support for 4K UHD in an acceptably movable package.

While the Horizon Pro kills it with amazing picture quality for movies and TV shows, I like to game with the Nintendo Switch using the Horizon Pro. The 60Hz refresh rate and low latency with MEMC frame interpolation to reduce motion blur don’t disappoint. These features glide through any daily usage you might throw at it.

The Horizon Pro can generate a maximum picture size of 200 inches and packs a resolution of 3840×2160 pixels. The throw ratio is rated for 1.2:1, which is important to keep in mind as this figure determines how far away from the projection surface the projector needs to be for a particular picture size.

Auto-focus and auto-keystone correction come out of the box with the Horizon Pro, both of which are vital for ensuring picture clarity and mitigating distortion at angles. The auto-focusing happens in mere seconds and generates a crisp image. Manual tuning isn’t required but is available if you want it. Obstacle avoidance is also built in, which detects objects like picture frames or windows and projects around them instead of over them to preserve picture quality.

While the Horizon Pro does support 3D movie projections, that isn’t something I use regularly or that I tested. I don’t even have a pair of 3D glasses.

An important factor when considering a DLP projector is the brightness rating since this impacts how visible the picture will be in the daytime or nighttime. Generally, the higher the ANSI Lumen rating the better, and the Horizon Pro packs a whopping 2,200 ANSI lumens.

Built-in AI automatically fine-tunes the brightness based on ambient lighting, so the projector can be performant when it needs to be and power efficient when it can be. The projector also uses HDR10 technology to keep those bright and dark colors distinguishable to the eye.

Only a handful of DLP projectors such as offerings from BenQ and Nebula get anywhere near the 2k lumen brightness rating we find in the Horizon Pro, and it’s right about where you want to be if you plan to use a projector in a normally lit room during the day or night without having to close the blinds and curtains during the day.

If you plan to use the Horizon Pro as an outdoor projector like I sometimes do, it’s important to note that even 2,200 ANSI lumens won’t overpower the Sun. It works best after sunset, and especially after dusk, with or without a projector screen. Ambient lighting is fine in most cases since the 2,200 ANSI lumens can outshine most mild lighting.

One downside to DLP projectors in general is that darker colors can appear grayer and washed out, and it’s especially noticeable if your eyes are accustomed to the vibrant colors of mini-LED and OLED displays like those found in the latest iPhones, iPads, and MacBook Pros. Even some of the higher-end TVs are packing OLED displays these days, but you unfortunately won’t get the same rich black colors out of projectors like the Horizon Pro because of how they work. 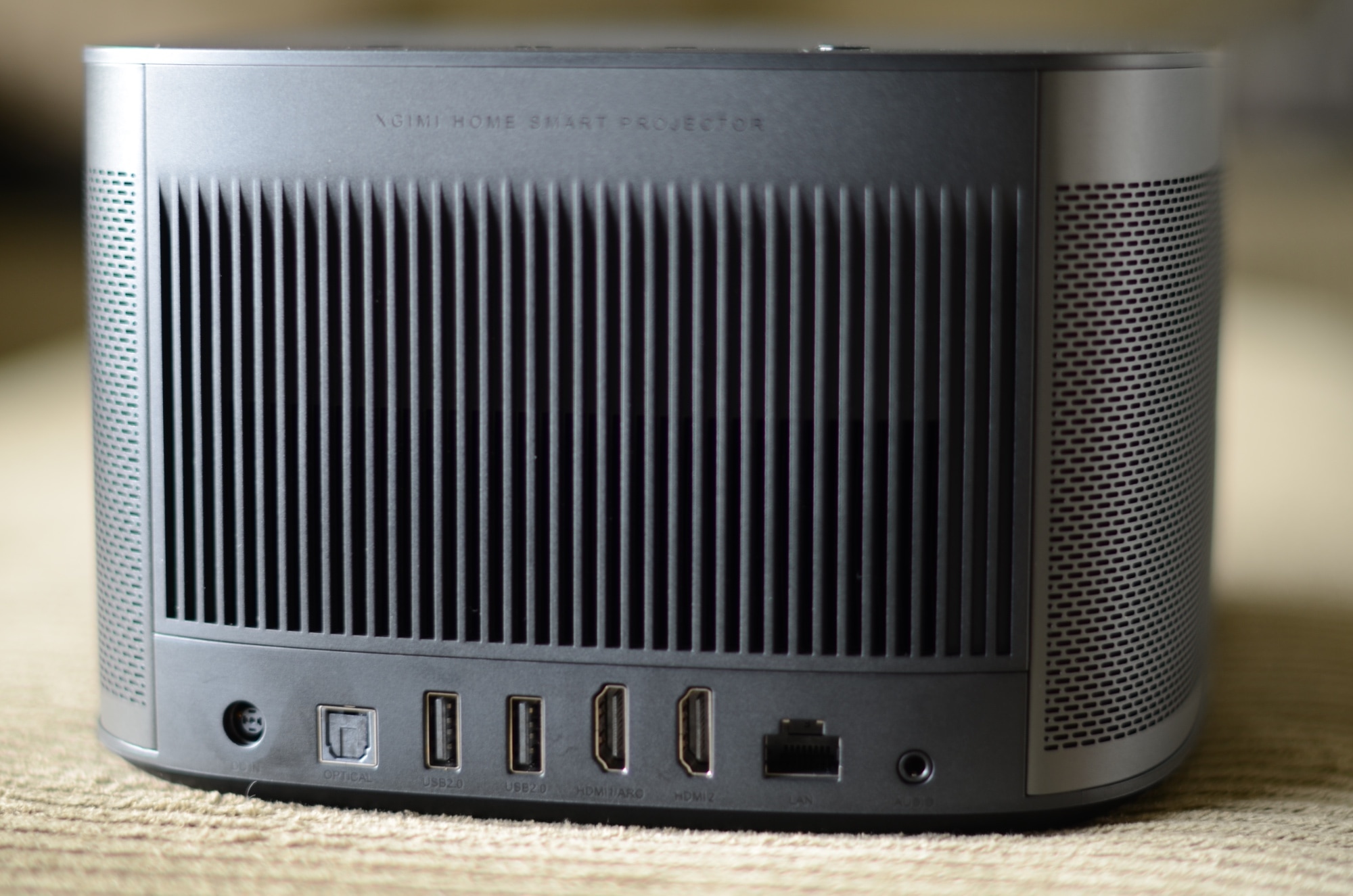 The Horizon Pro comes with a ton of I/O on the back, including the following:

The first of the two HDMI ports on the back of the unit supports ARC — the standard by which audio is integrated into the same connector so you won’t have to run a separate wire for sound. The second HDMI port does not support ARC, so you will need to run a sound cable if you use that one instead. This gives you the choice to use copper or fiber optic for sound, which can be helpful depending on your sound setup.

With the USB ports, you can play media from flash drives or hard disk drives that you can access via a media viewer app in the pre-installed Android TV 10.0 operating system. In addition to ports, the Horizon Pro has built-in dual-band 2.4/5GHz 802.11a/b/g/n/ac Wi-Fi and Bluetooth 5.0/BLE connectivity. That said, if you prefer to go wire-free and cast content to the Horizon Pro, then you could certainly go that route instead.

If using external speakers isn’t your forte, then you’ll be happy to learn that the Horizon Pro packs two built-in 8w speakers by Harman Kardon that immerse an entire room with surround sound. I’ve used these speakers both inside and outside and haven’t found myself disappointed in either environment whatsoever. 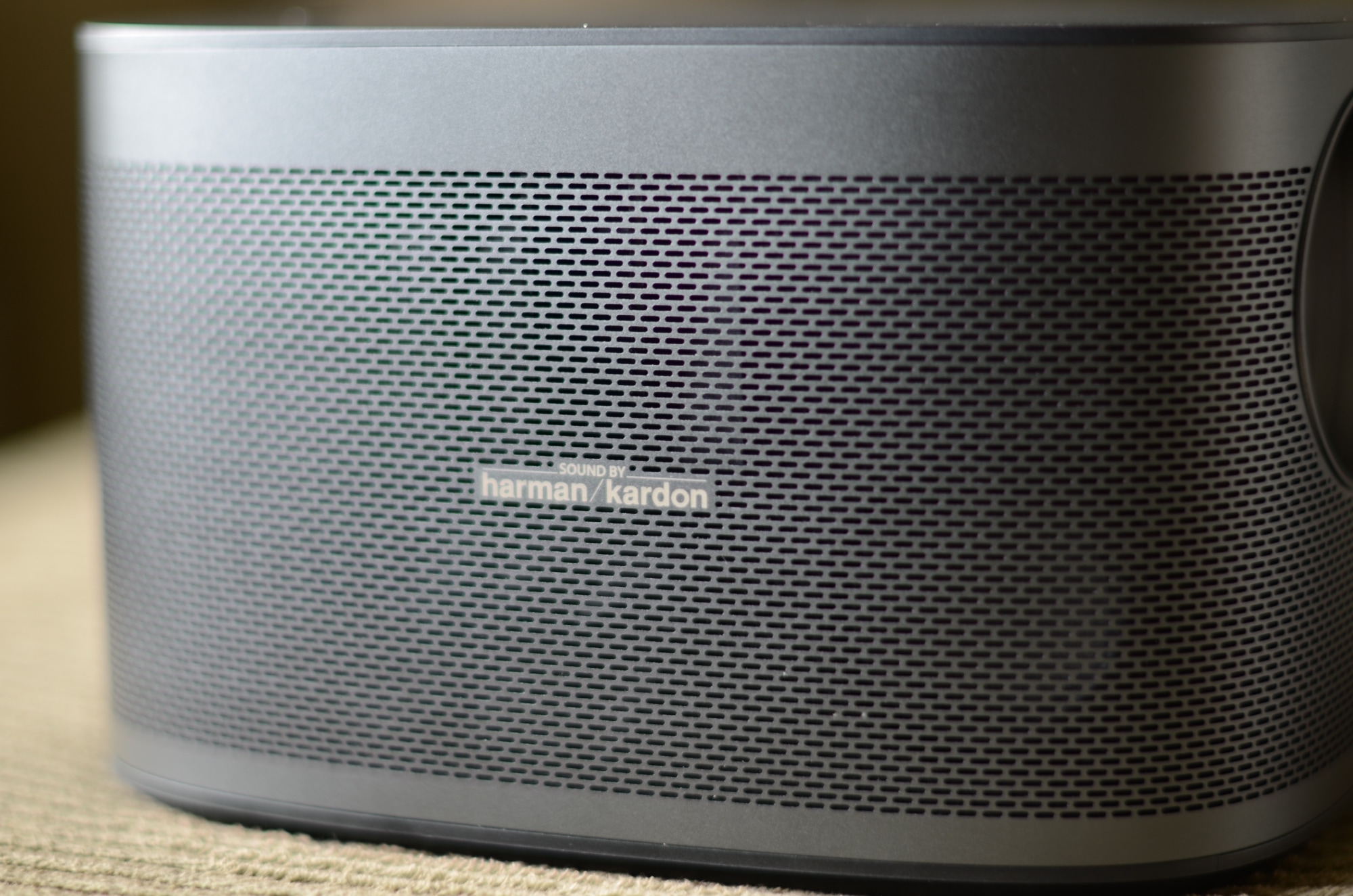 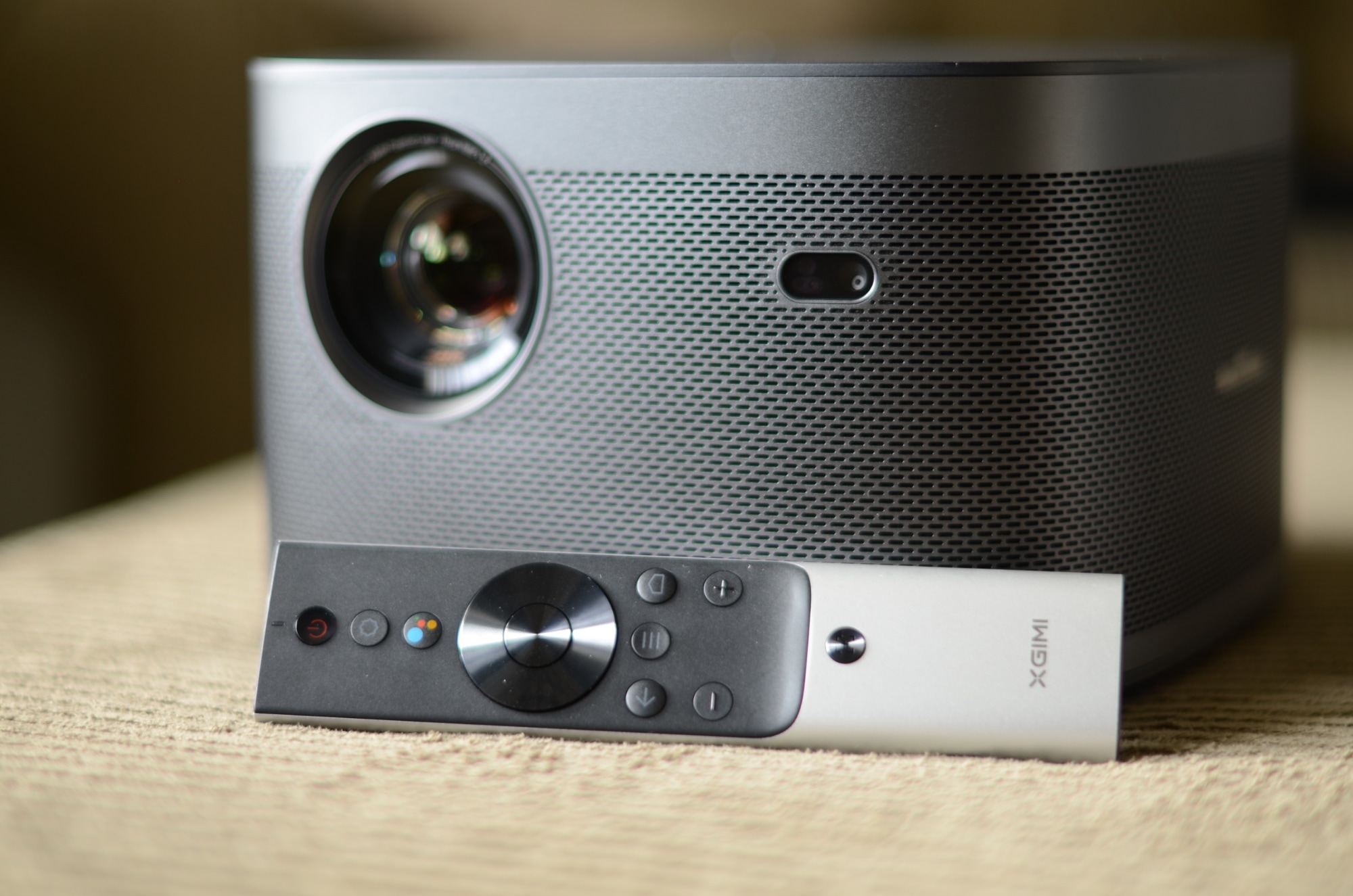 The remote control uses two AAA batteries and unfortunately isn’t rechargeable, although we wish it was considering how similarly-sized remotes like the one I use for my Apple TV 4K are rechargeable.

The Horizon Pro also has touch-sensitive buttons on the top of the unit itself for powering the projector on or off, adjusting volume up and down, and playing or pausing content. 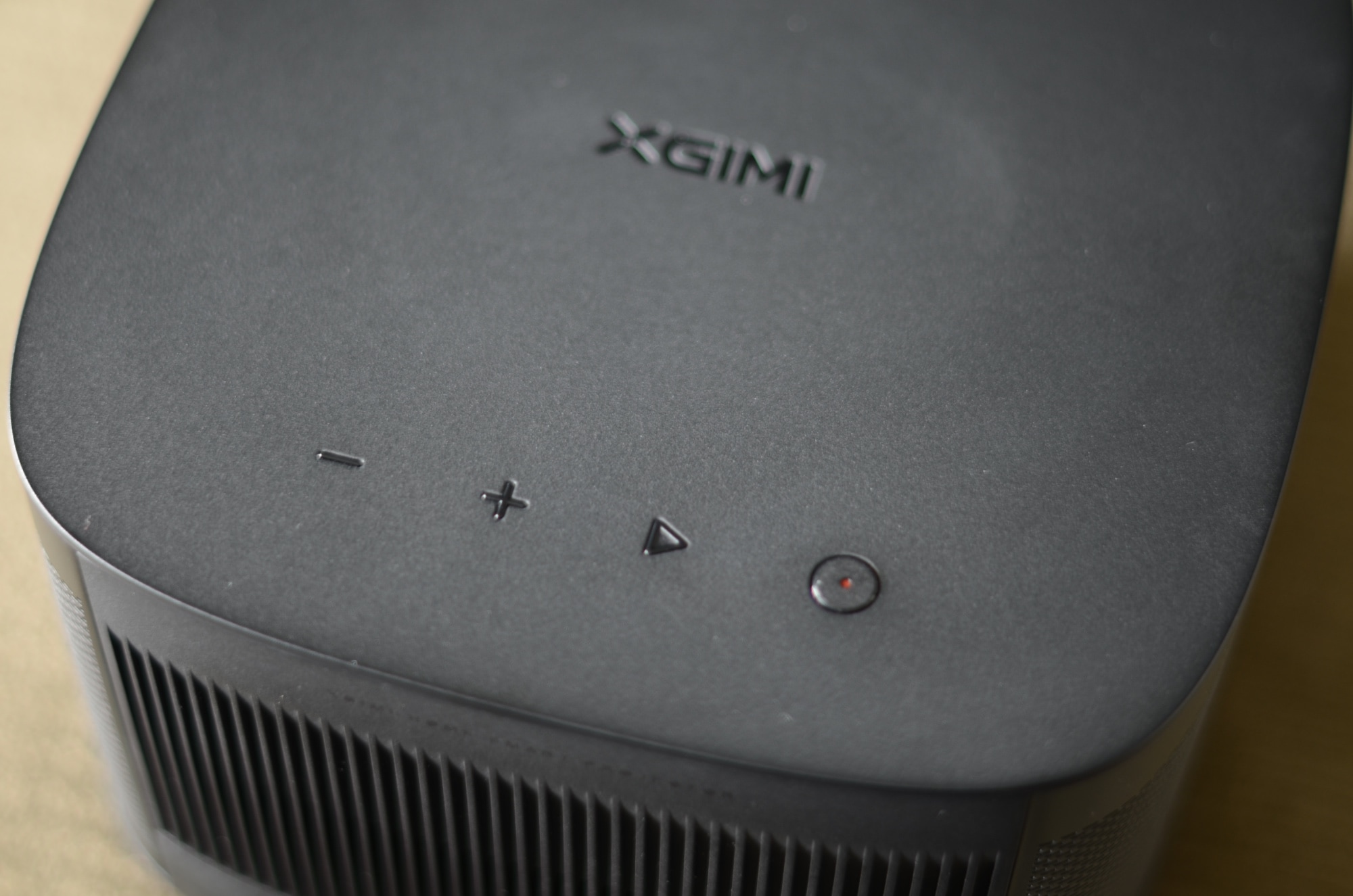 Measuring 8 inches wide by 8 inches long and having a depth of 5 inches, the Horizon Pro is somewhat compact given the capabilities crammed into it. It also only weighs 6.4 pounds, so you won’t break your back moving it around. Factoring the large power supply that comes with the Horizon Pro, you’ll be looking at about 11 pounds if you plan to take the whole unit around with you.

If taking the Horizon Pro out of your house, then you may want to invest in a protective carrying case because it doesn’t have a carrying handle nor is there a cover for the lens window to protect it from damage. We suggest a carrying case with separated compartments so you can store the power supply with the projector and not have any of those parts rubbing up against one another during transport.

It’s also worth noting that the Horizon Pro doesn’t have a battery, so you will need constant power. While you could use an external battery to power the Horizon Pro, not just any small battery will do; you would need a large one that can handle big power consumption for prolonged periods of time and that supports a three-pronged U.S. power cord.

Anti-slide feet at the bottom of the Horizon Pro let you set it on a table and begin projecting. Otherwise, you can take advantage of the ¼-inch tripod mount at the bottom to screw in your favorite tripod or projector mount and stand it off in your preferred location in a room or environment. 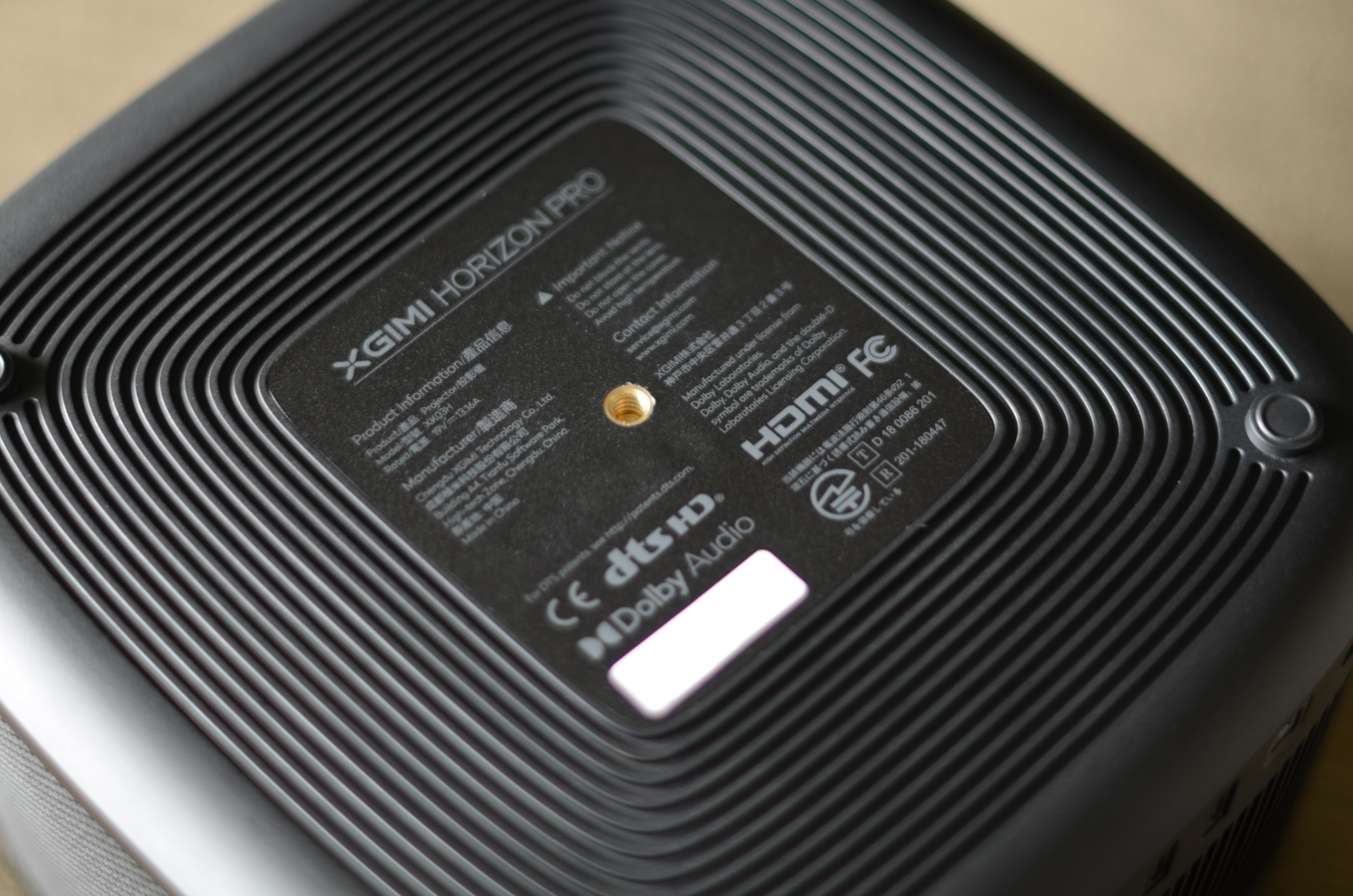 Many modern smart projectors are running some version of Android TV, and the Horizon Pro is no different. It runs version 10.0 and provides tons of entertainment, information, and streaming apps through the Google Play store.

One thing noticeably missing from the Google Play store is the Netflix app, which unfortunately isn’t provided because of licensing on Netflix’s part. A modified version of the Netflix app can be sideloaded, but many users have reported mixed success in controlling the app. Because of this, it’s best to run Netflix on your phone or computer and either AirPlay or HDMI your playback to the projector instead.

My thoughts on the XGIMI Horizon Pro

Using the XGIMI Horizon Pro has been nothing short of a blast. I could have bought a halfway decent TV, but then I’d find myself missing out on the portability and versatile screen sizing options afforded by a projector experience. So the choice was obvious to me – to each their own, however.

XGIMI wasn’t a fringe brand choice either; iDB was previously impressed with the XGIMI brand, so it was one of the first places I looked, and I’m happy I did.

While testing the Horizon Pro, I noted positive and negative things about the experience that I’ll share below:

How to get one

Projectors aren’t cheap devices, but the Horizon Pro is priced to compete with some of the best $2-4k projectors you can use for home theater setups and performs just as well. In fact, it provides crystal-clear picture quality whether you prefer a TV-sized projection or a cinematic-style projection and delivers yummy eye candy in every regard.

The Horizon Pro is frequently priced at $1,699 on Amazon with free Prime shipping, but we always tend to see one-click coupons that offer deeper discounts, so it’s a good item to add to your list and keep an eye on. In fact, the most recent coupon at the time of this writing takes a whopping $425 off the retail price. Alternatively, you can pick one up from XGIMI directly, however the shipping might be slower than Amazon Prime.

And make sure to do yourself a favor if you get the Horizon Pro and get a carrying bag to store and transport it in. We can’t stress this enough since you want to protect your investment when not in use.

While TVs are nice, they’re not ideal for someone who wants to take their display with them. Projectors like the Horizon Pro are great for get-togethers, outdoor viewing experiences, and gaming on gargantuan screens that exceed standard TV sizes. Of all the projectors I’ve ever used to date, the XGIMI Horizon Pro is my favorite and I don’t think you’d be disappointed one bit if you tried one.