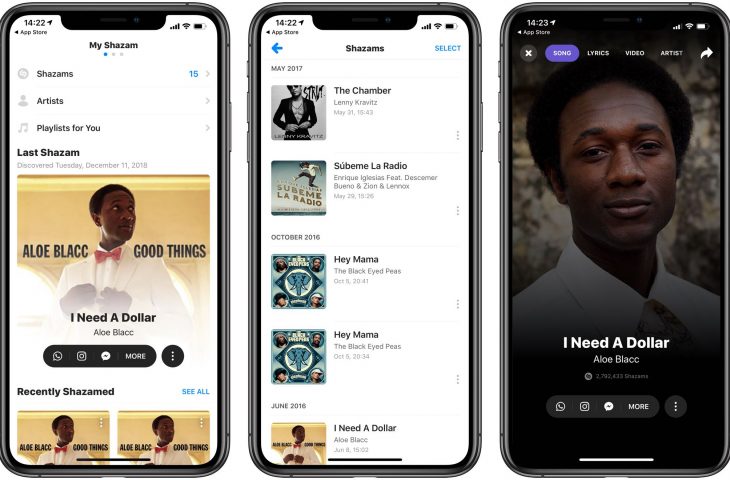 The song identification service Shazam, owned by Apple, updated its apps on App Store with the handy timestamps next to your Shazamed songs.

Both Shazam and Shazam Encore (an ad-free version of Shazam) have been bumped to version 12.10. Their official changelogs do not mention any other features or fixes:

When did I Shazam that? Good question…Next time you visit My Shazam, you’ll now see the date and time for each of the songs found.

As one of the world’s most popular apps used by more than 100 million people each month to identify music, get song lyrics and discover the music that artists discover themselves, small wonder that Apple acquired Shazam and has “exciting plans in store” for the app.

TUTORIAL: Creating an Apple Music playlist with your Shazamed songs

The Shazam team is now part of the Apple Music team.

Shazam integration on Apple devices is available through Siri for iPhone, iPad, Apple Watch and Mac. The app has been downloaded more than a billion times to date and people use it to identify more than 20 million songs every day.

The premium Shazam Encore app used to come with a $3 upgrade to get rid of ads, but not anymore as Apple has followed through its promise to make the Shazam experience ad-free.

Shazam and Shazam Encore are available for free on App Store.